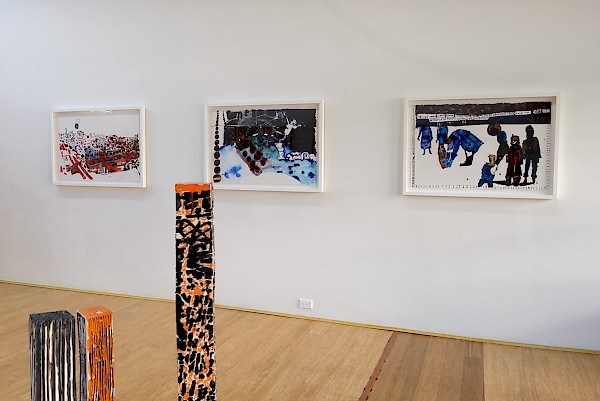 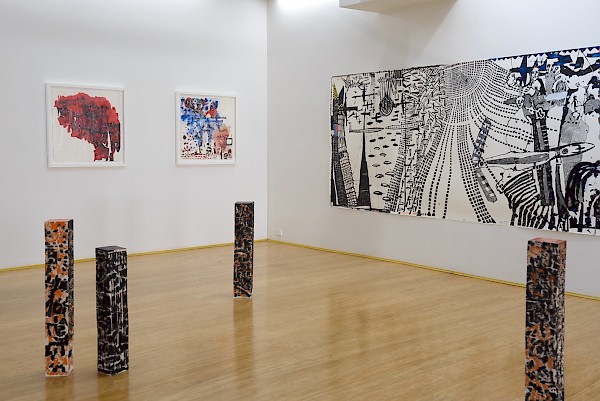 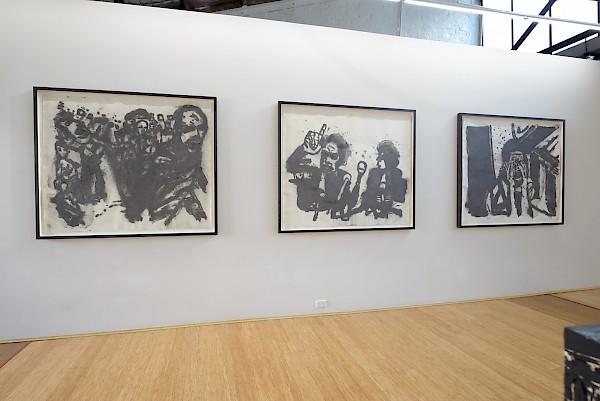 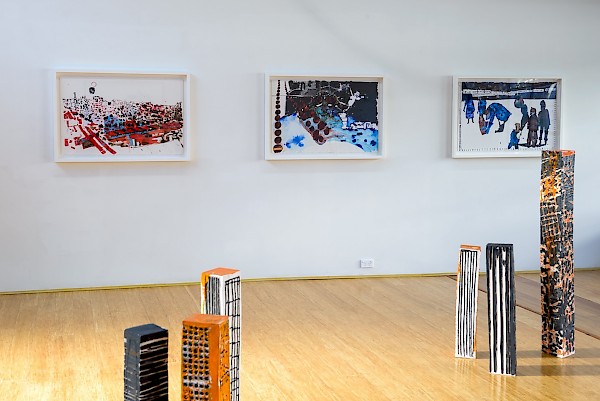 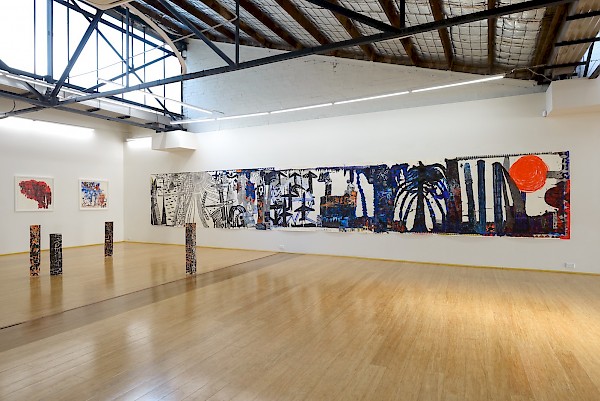 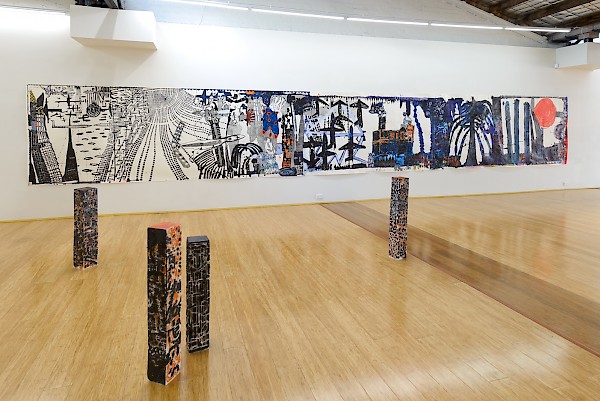 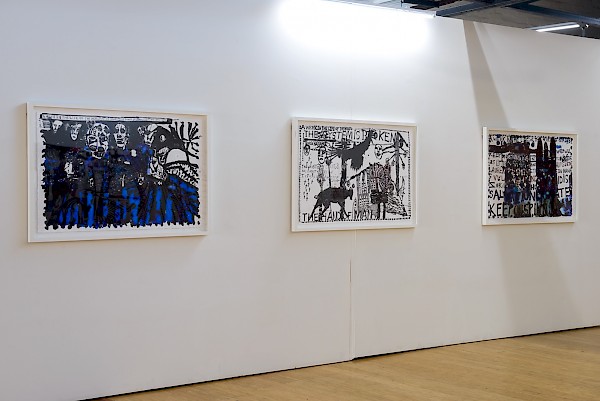 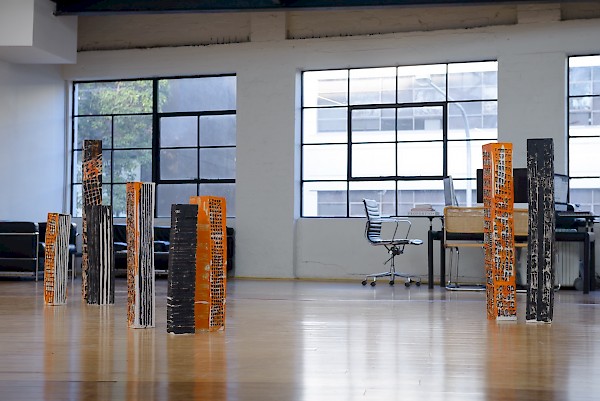 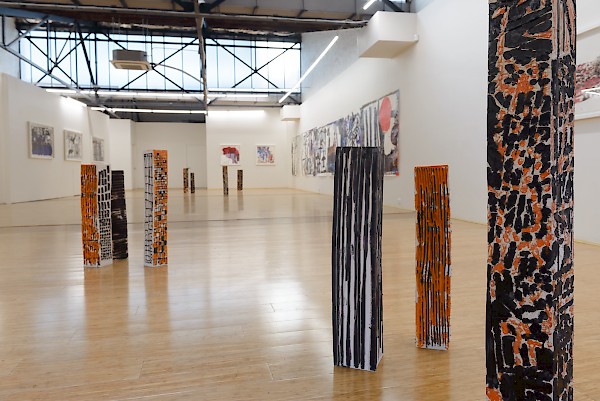 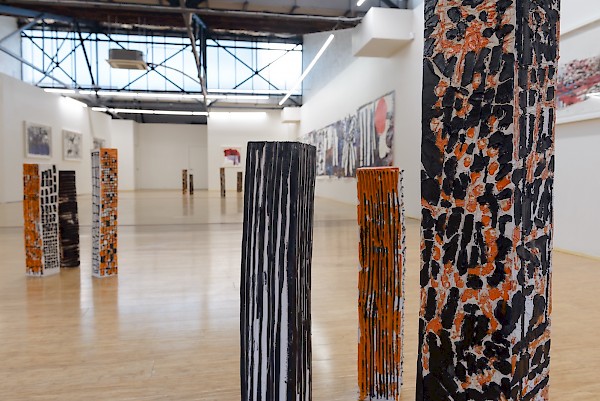 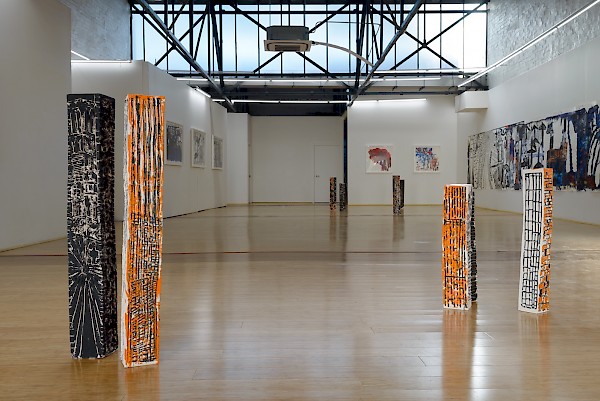 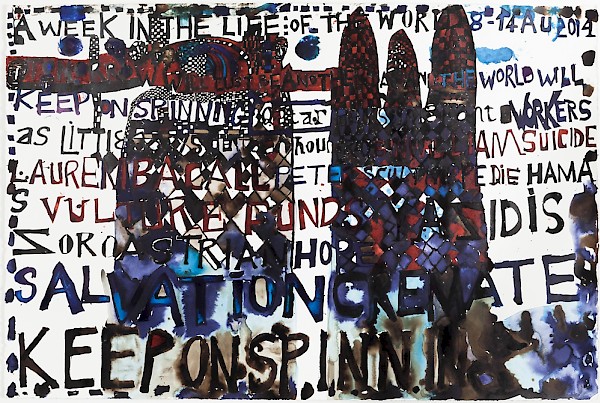 "The first thing I do when I wake up in the morning is turn on the radio, then the internet - Al Jazeera, followed by other world mass-media internet sites. I listen to stock market quotes, financial information, reports on who has died, what plane has crashed, what politician has been assassinated, what climate disaster is coming, endangered species, nuclear accidents....

In the kitchen while I wait for my coffee to brew, Iscibble down these facts and figures on the cupboard doors and walls. All this information is channeled into my drawings and paintings. I then go out and buy the current newspapers, as well as second-hand books and magazines from op shops. Later while I work in the studio, I continue to listen to the radio or live streaming from Al Jazeera. I'm permanently plugged into the chaos of the day.

In a way, I interpret all I hear and see and make a picture of it in my head. This short-circuits into drawing. For example, in a recent work I've drawn red mountain shapes. A solitary airplane has clipped one of them with its wing and is going down. This is an interpretation of the Germanwings accident in the FRench alps. In another current series of drawings I'm working with graphite powder and aquarelle pencils to illustrate screenshots of last year's war in Gaza. It's the contrast in the photographic images I'm drawn to. I trawl the internet for pictures that have this contrast and depth and arrangement of figures. It has to be the right one for the picture I'm making.

I rely on a few things for this to happen: the photographic image combined with the power this image instils and how it makes me feel - the resonance and consciousness it sparks, the outrage or disbelief it provokes.

I was recently reading an Al Jazeera article in bed on my iPhone about the fourth anniversary of the Syrian Civil War. In a picture accompanying the article were two women running away from their house that had just been barrel-bombed. One woman had a head wound and blood was streaming down her face. But it wasn't this that shocked me - it was the look of horror and pathos in her eyes. It was so powerful that it made me get out of bed, go to the studio, and draw.

It's the same with some graphite powder drawings I'm making at the moment. There is a scene with three Hamas militia members wearing black balaclavas. They are leading three suspected Israeli collaborators in hooded attire to a place of execution. Equally, when I watched a John Pilger documentary about the Carlyle Group and the connections to insider trading, Halliburton, Bechtel, Dick Cheney, George W Bush and the 'war on terror', it moved me to enter the studio, rip a five-metre length of paper, staple it to the wall and start a stream of consciousness in pencil and graphite. The work was called Surge 'til the End, a direct response to the documentary: the surge of United States military to the war in Iraq; extracts from the Qur'an...

Just now I'm making works on the 'Bali NIne' pair being shot by firing squad, and using pictures from executions bu ISIL and Boko Haram for imagery. In this way, the information I process and use in my work directly references what is happening in the world.