Trouble on the Range 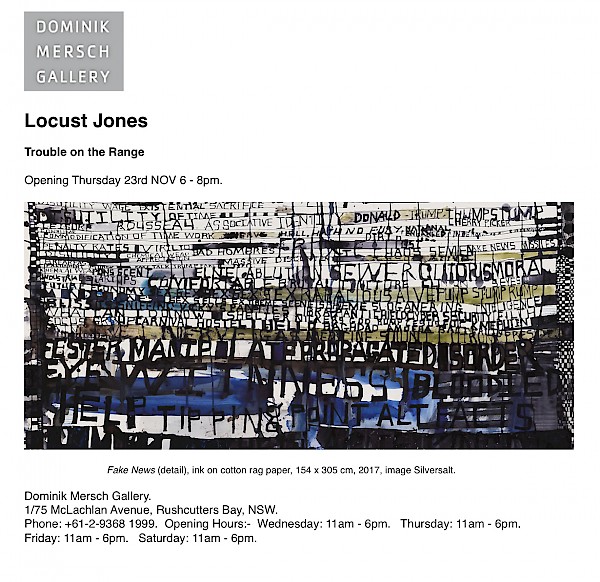 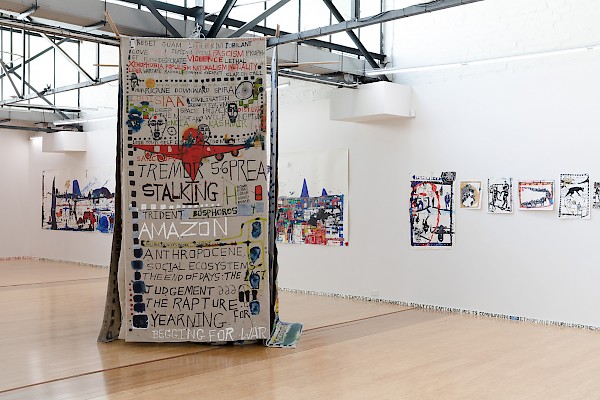 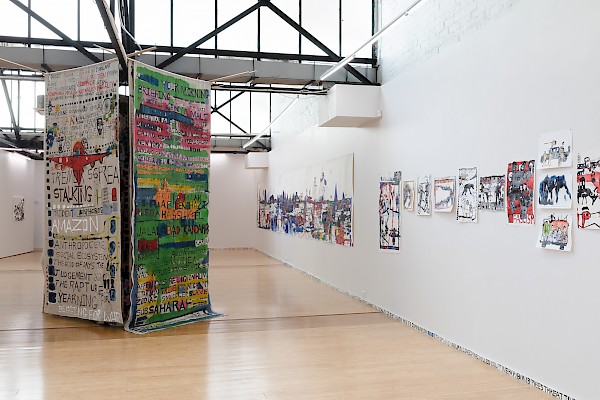 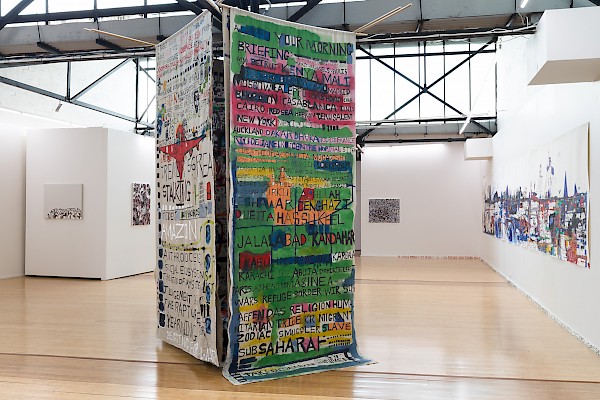 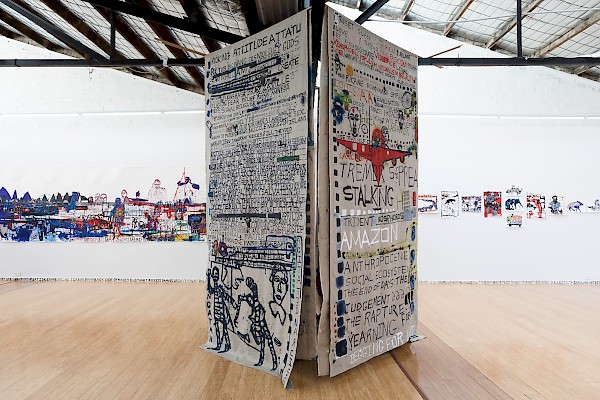 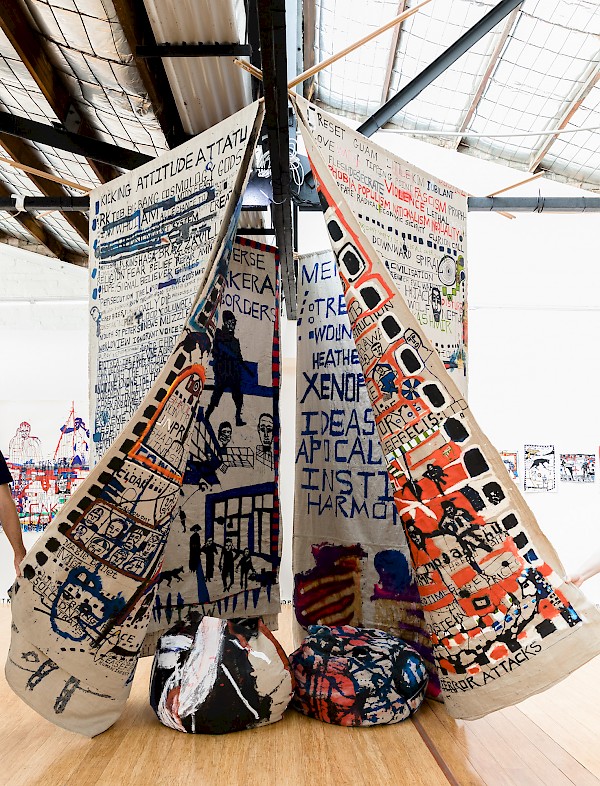 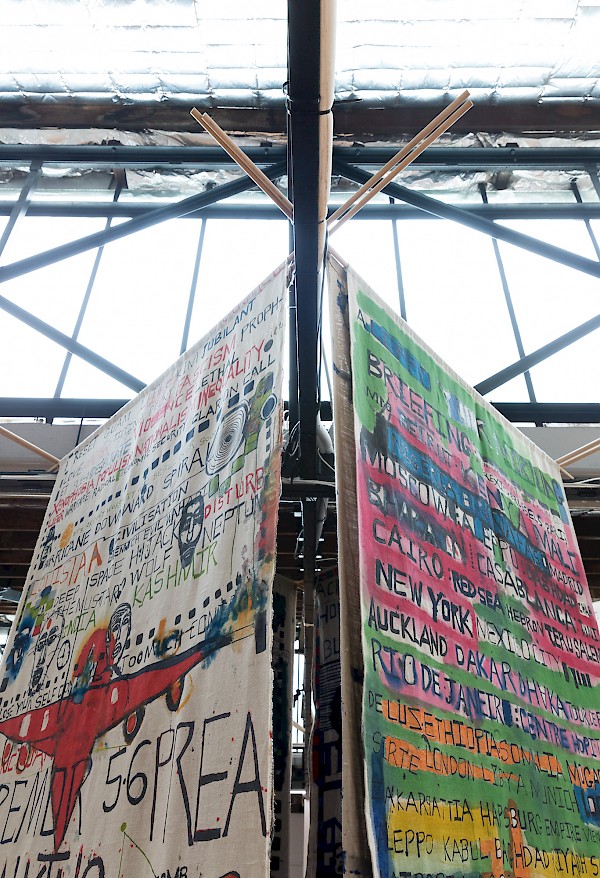 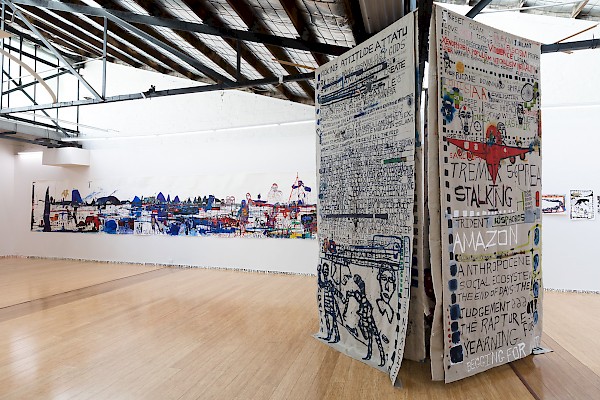 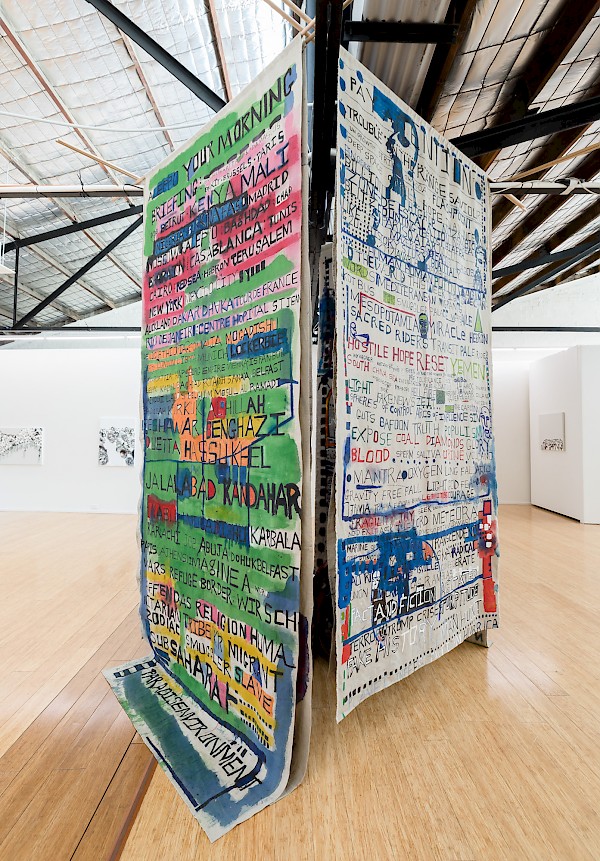 Locust Jones: Getting to the Truth

Locust Jones’s ambitious drawing practice unfolds across single sheets and vast rolls of paper. An expanded archive of global news and personal motifs, the works filter information from the outside world through a deeply personal lens. Images of civil war and terrorism, corporate corruption and social unrest vie with references to the artist’s studio and life in the Blue Mountains outside of Sydney.

Speaking about his practice, Jones describes the cacophony of international headlines that filters through his studio daily. ‘Al Jazeera, the New York Times, radio, newspapers, the internet … I sit there and listen to what’s going on in the world.’ There is a curious contrast between the quiet of his home life in Katoomba – a self-described ‘bubble’ – and the racket of catastrophic events outside and beyond. Present, yet removed, he speaks of his interest in the juxtaposition of worlds. ‘In Australia, we’re far away’, Jones observes, ‘but with the internet you can be anywhere [at any time]. It’s about making sense of senselessness.  If you listen, tune in so much, you need an outlet; I have an outlet, which is drawing. If I have paper and ink I front of me I can get it [all] out of my head’.

Jones’s drawings proliferate across dozens of single sheets, as well as vast rolls of paper or linen that unwind across the studio bench. Utilising ink, pencil, watercolour and gouache, they combine imagery and snatches of text that float together uneasily like a jigsaw puzzle. Some works are subsequently suspended like scrolls at four or more meters from the gallery ceiling; others are looped together in tenImeter sections, giving them a dramatic immensity that can tackle vast spaces like Sydney’s Carriageworks, for the exhibition ‘Sydney Contemporary’ (2017).

Ambiguity lies at the core of Jones’s practice with its uncanny combination of personal and global motifs. Much writing to date has focussed on the political dimension of the artist’s work, with its endless newsfeed and stuttering headlines, some of which give the individual pieces their titles – including that of the current exhibition, ‘Trouble on the Range’. Yet animals and references to nature abound also, some culled from the magazines that Jones regularly reads and collects, including National Geographic and Scientific American. Horses and dogs proliferate, the first an image of untamed nature and the latter, man’s best friend and the artist’s own two kelpies, who inhabit the studio most days. ‘Sometimes’, he observes, ‘I find scientific journals more interesting than the news. It brings you back down to earth a bit.’

Airplanes feature regularly too, representing a potent militaristic symbol but also, perhaps, the desire for escape. A spider’s web motif can be read in many ways from the World Wide Web to vast webs of corruption and conspiracy. Repeated references to the Paradise Papers reinforce this association, inspired by the massive data leak and subsequent German media investigation of where wealthy people including the Queen of England invest their money offshore. The notion of the jigsaw, with its assembled and sometimes awkward parts, is fitting for Jones’s practice. It is also literally expressed in several new works that are torn into sections, illustrated then combined afresh. Accumulated ink from the surface of the artist’s desk stains the sheets and distorts their imagery, adding complexity and ambiguity to the scenes depicted. The accidental nature of this process is something Jones takes pleasure in, allowing the works to evolve through unexpected and spontaneous means. Interestingly, Jones commenced his working life as a farmer in New Zealand’s south island, pursuing formal studies in art after an accident rendered him unable to work for an extended period. The quiet isolation of rural life and the daily presence of death in the animal world – the killing of livestock, ordinary accidents and injuries, culling rabbits on the property – represent a pointed contrast to the hubbub of the radio with the world news pressing in. ‘There is a lot of violence in farming culture’, he reflects today, adding, ‘my focus is not just about war and so forth, but daily life, the land, the ordinary violence of the life cycle.

In late 2016 Jones commenced a major work about German Chancellor Angela Merkel’s 2015 pledge to accept one million refugees into Germany, in response to the world refugee crisis. Entitled Wir schaffen das or ‘we can do it’ (Merkel’s words at the time), the work deviated into a wider, sprawling set of themes and imagery through which an Australian narrative began to emerge. He says: ‘I asked myself, why am I doing this work about Germany when I should be turning my gaze to our own back yard?’

Wir schaffen das forms a centrepiece of Jones’s current exhibition and is expanded by over 50 smaller works on paper. A suite of larger linen works also hangs in a friezeIlike formation, and viewers are invited to sit and ‘read the news’ accordingly. Through large events and small, international headlines and daily life, Jones assembles a metaInarrative of human fate which, one and all, we are a part of.