a descent into the mass media maelström 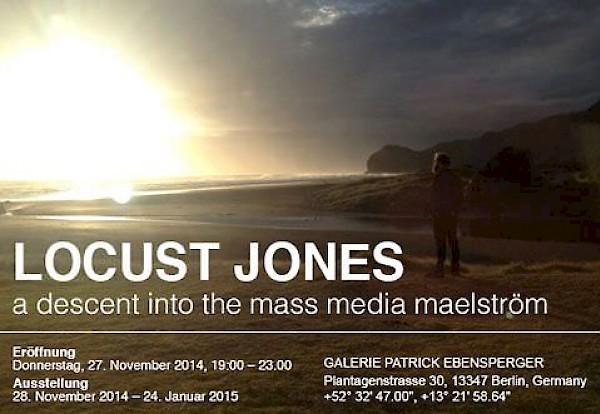 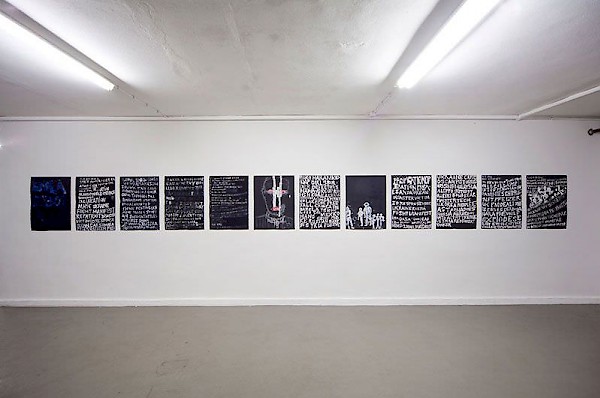 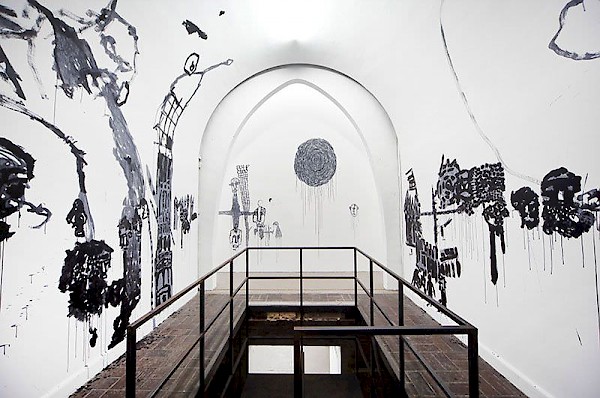 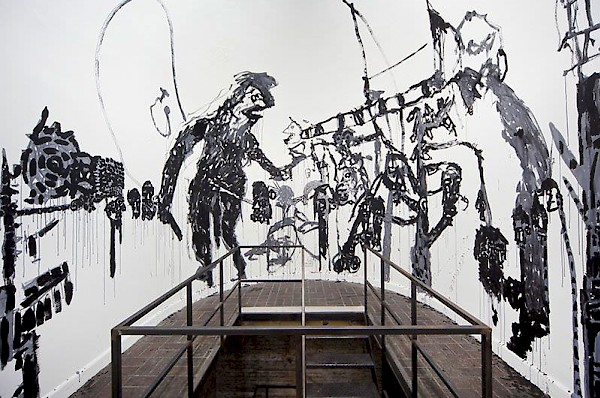 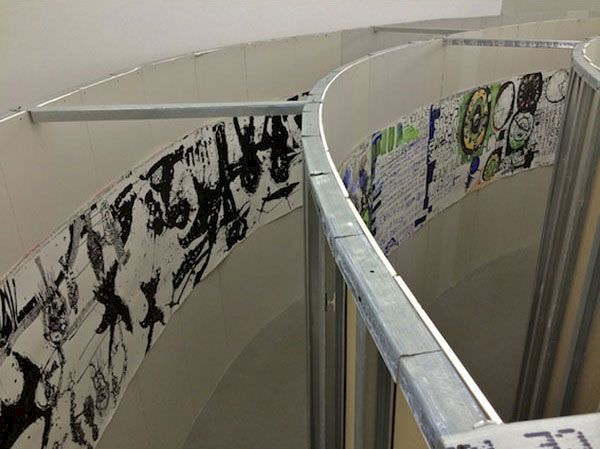 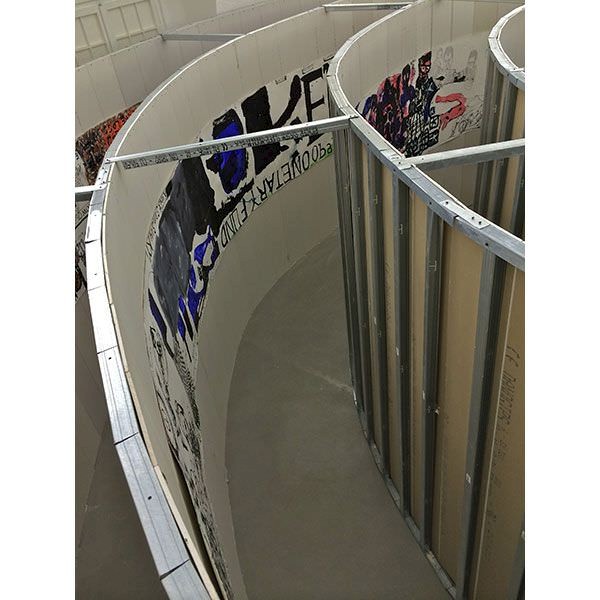 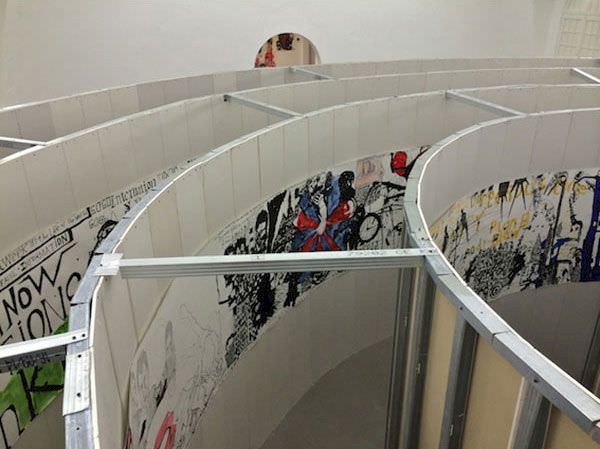 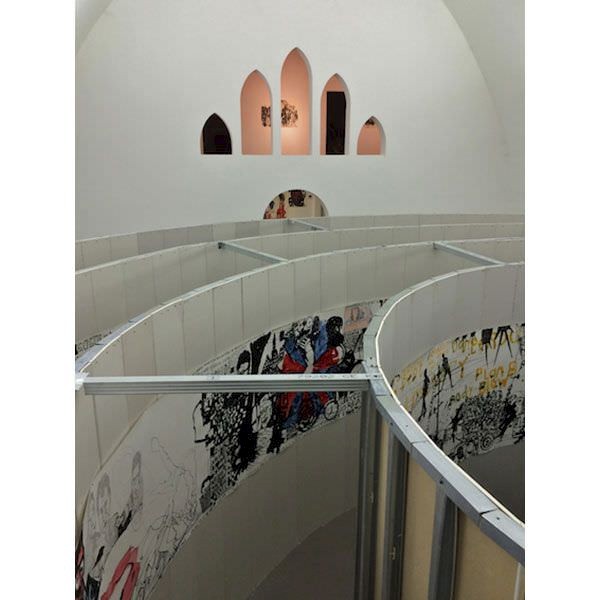 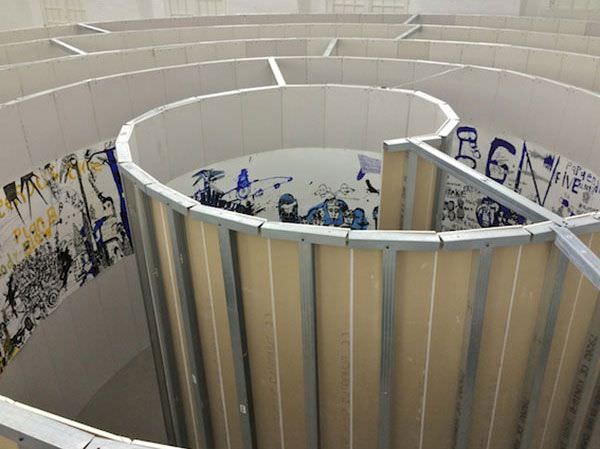 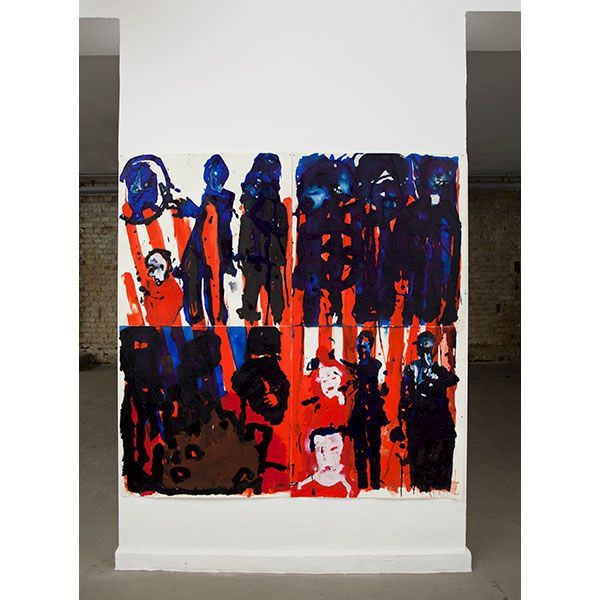 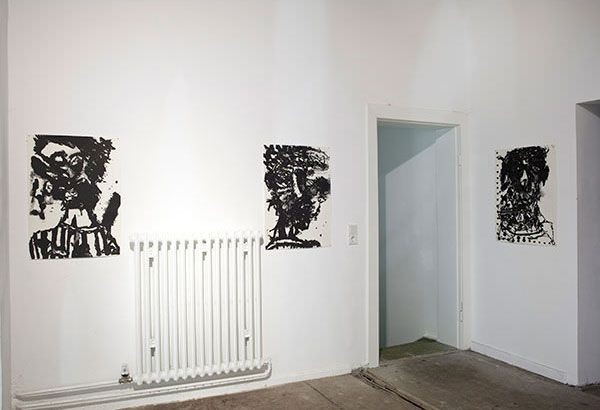 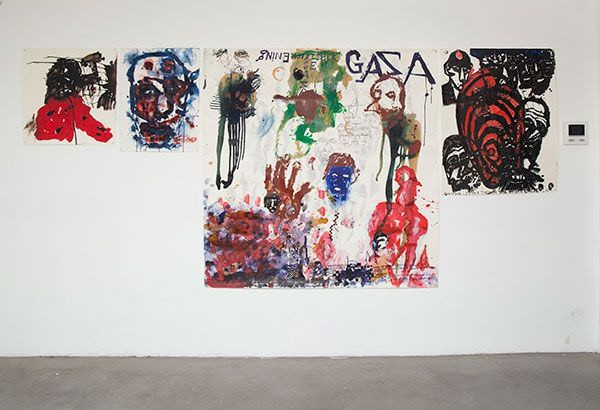 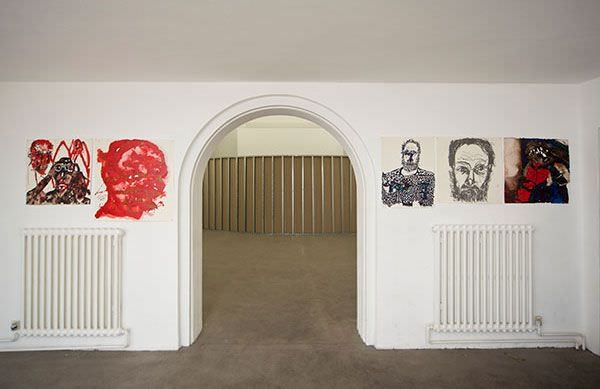 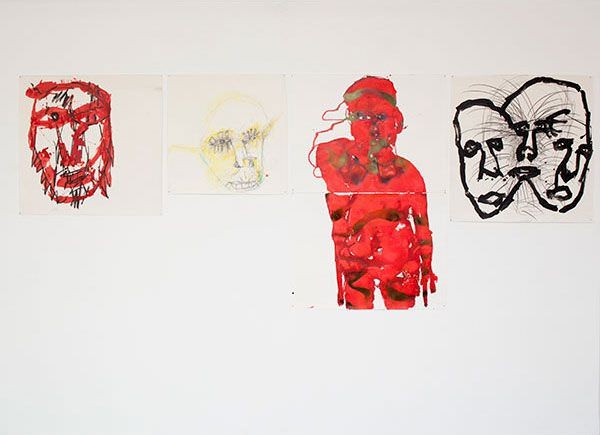 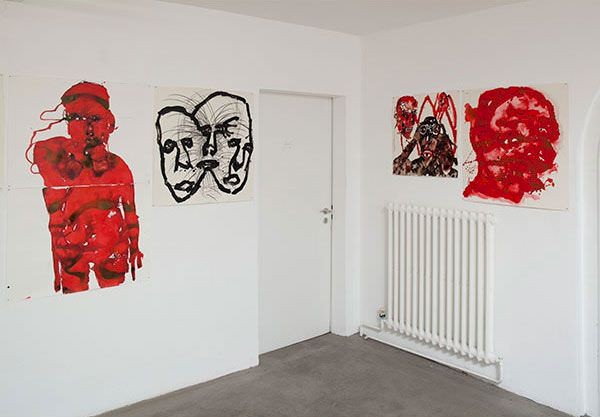 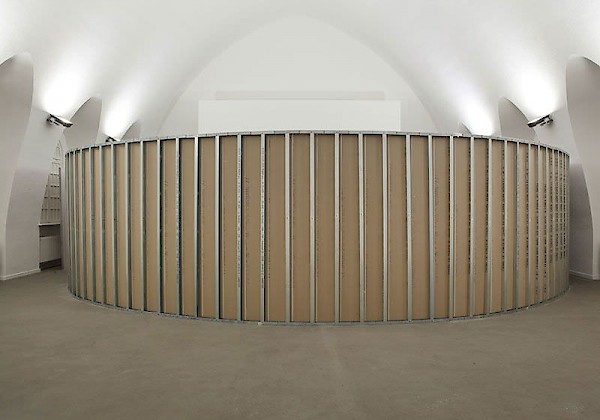 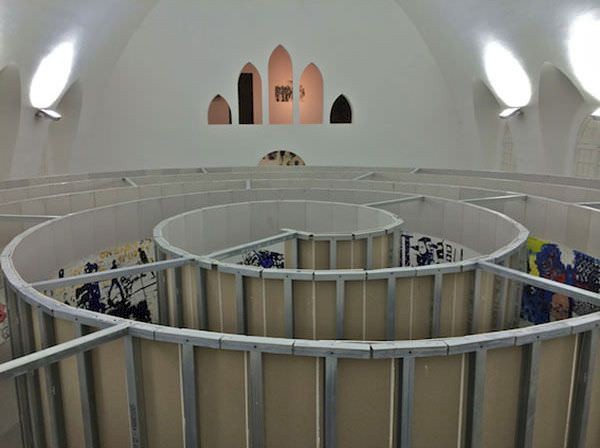 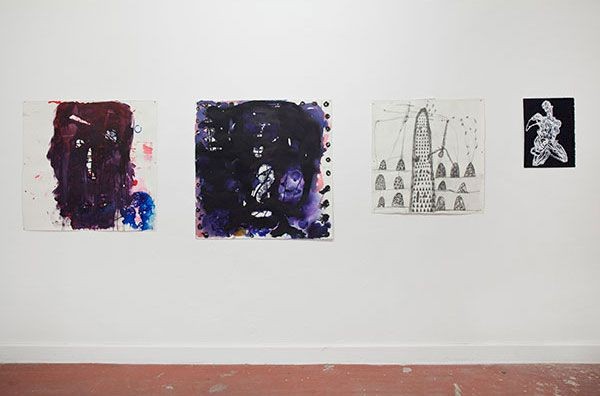 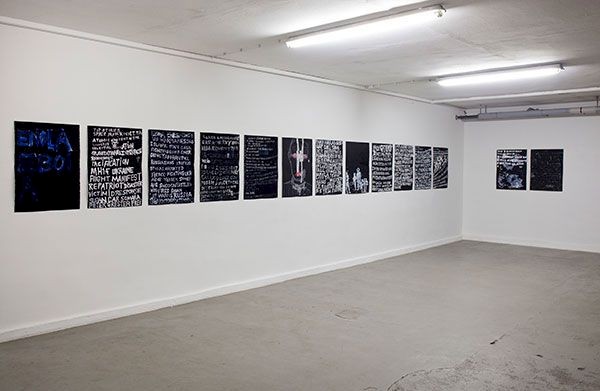 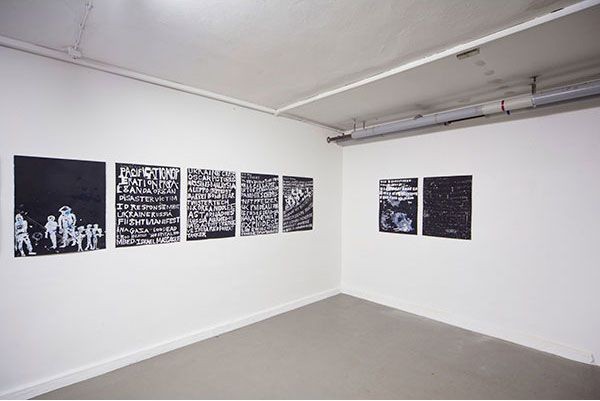 Housed within a former crematorium, Galerie Patrick Ebensperger, Berlin provided a unique setting for Locust Jones’ ambitious solo exhibition “a descent into the mass media maelström” (2014/15). New Zealand-born Jones has earnt a reputation for utilising stimuli from his surrounding environment as content for his artistic practice. The artists’ modus operandi centres on a process of random selection, whereby imagery and text collected from newspaper clippings, the Internet, television and radio are absorbed and re-interpreted, resulting in violent visual collisions of ink on paper. Jones’ meniaical penchant for vilifying the mass media is omnipresent throughout the prodigious presentation of 80 drawings, 15 lithographs, 100-metre-long scroll installation and site-specific wall mural.

The exhibition’s title unveils Jones’ critical examination of the media’s role in society, referencing Edgar Allan Poe’s short story “A Descent into the Maelström” (1841). In this tale, a man recounts his perilous life-changing experience of survival at sea caught in a whirlpool—the Maelström. After plunging to the earth’s vast depths, the gravitas of the encounter causes the protagonist to reflect on the insignificance of individual life. This vortex is utilised as a metaphor for the deluge of information—in Jones’ case misinformation—transmitted by the media. Controlling and manipulating our understanding of the world, unwillingly it pulls us in. The term ‘maelström’ throws up associations of a restless and tumultuous state of affairs. It is precisely this ‘state of affairs’ that Jones is intent on investigating and exposing through the works in this exhibition.

In the main gallery space audiences discover a seemingly impenetrable circular structure of towering height that bridges the width of the room. Upon closer inspection, this industrial fencing system reveals an opening to a curved interior wall that acts as a presentation device for an epic 100 metre-long drawing entitled “bankrupt, isolated and confused” (2011/2012). Winding around five rotations of a concentric spiral, gallery patrons are invited to enter the sculptural intervention. Walking through to its centre viewers become immersed in boundless primal scrawl in watercolour, graphite and ink on paper.

Jones’ dense imagery is heightened with such intimate proximity to the work. Traversing the cochlear path, one can almost relive the creation process; the drying of ink and continuous rolling of paper. Aiming to “design one long newspaper about the world”, Jones has arrived at a conglomeration of disparate content referenced from material as far-ranging as the minutiae of stock market statistics and oil prices, to the threat of terrorist attacks in Syria and Ebola outbreaks. Impressions of the artist’s rapid hand movements and intuitive mark making are indelibly distilled in spontaneous compositional choices, unlikely juxtapositions and layering. Viewers are confronted with an optical jumble of disembodied faces irregularly proportioned and positioned, anonymous figures, flying drones, skyscrapers, birds, insects and army vehicles. Dominant dark gridded sections of detailing and target-like shapes catch the eye. Words and phrases in inky hues taken from newspaper headlines such as: “money hungry fascist”, “targeted airstrike”, “feared dead”, “pacify”, “fugitive” and “criminal acts” leap from the paper’s surface in upper and lower case expressing an apocalyptic worldview. These particular elements represent an extension of previous laborious text works by Jones such as “Surge til the end” (2007), similarly echoed in British artist Fiona Banner’s handwritten wordscapes like “Black Hawk Down” (2010).

Squeezing past others returning from their inward journey, the outside world is left behind. Excluding the view of the ceiling, all external vantage points are screened. The physical confines, coupled with the bombardment of catastrophic imagery incite feelings of isolation, anxiety and claustrophobia. Drawn into the abyss and closer to the restless mind of the creator, the viewer becomes engulfed in a frenzied wilderness; a maelström of despondency and hazard. Resembling an accumulation of deranged conspiracy theories and propaganda slogans, “bankrupt, isolated and confused” is emblematic of Jones’ practice, one that is unafraid to embrace politics and social commentary in art. Climbing the stairs to the upper exhibition area, an aerial view displays the awesome scale of this crowning achievement.

Moving further throughout the exhibition, a curated selection of lithographs and multi-media drawings line the walls at varying intervals. Additionally, Jones includes a suite of exclusive large format text works on paper. Like enlarged snapshots from an endless internal monologue, the imagery depicted further enlivens the associative thinking underpinning Jones’ process-driven approach to making work. Conflating unrelated material, an interconnected web is woven. A selection of self-portraits portray the artist as strained and disheveled. Unrecognisable faces in black ink appear defaced and deformed. Figures in blood red ink threaten. Masses of crowds swell. Bodies contort. Weapons of war are illustrated. United Nations representatives convene. One work depicts three ghostly conjoined faces in a simple line drawing. In another, a figure looks vigilantly ahead through binoculars. These works harness a collective sense of fear and pain derived from the media that is blended with the artist’s personalised cynical streak.

Such social criticism and primitivism embodied within Jones’ chaotic hand-drawn ramblings and scenarios recall moments located within German Expressionism in content and execution. This movement in art history correspondingly channelled widespread anxiety concerning humanity’s discordant relationship with the world. Consonant parallels to that of Jones’ work—specifically in communicating individual experiences of isolation—can be found in the work of predecessors such as: Otto Dix and his harsh depictions of the brutality of war, Erich Heckel’s figurative woodcuts, Conrad Felixmüller’s graphic works, and not least, in the title and nihilistic content of Heinz Fuchs’ lithograph “Arbeiter. Hunger. Tod naht. Streik zerstört, Arbeit ernährt. Tut eure Pflicht. Arbeitet” (Workers. Famine. Death Is Approaching. Strike Destroys. Work Nourishes. Do Your Duty. Work) (1919).

The exhibition finds an endpoint in a quiet alcove with an angled ceiling, revealing Jones’ painting skills on a large scale. The eery almost religious atmosphere plays host to an impressive wall mural across four walls that dwarfs viewers. Sending one’s gaze upwards, this incident in the gallery depicts dominating monstrous figures, architectural structures and circular vortex-like spheres in black and grey paint. Somewhat of a distorted successor to Picasso’s “Guernica” (1937), the immediacy and rawness inherent in Jones’ brushstrokes is magnified by the paint drips left to dry on the white walls. This organic wall painting imparts a strong, unnerving energy that resonates with onlookers long after leaving the gallery.

Edgar Allan Poe’s well-known tale, “A Descent into the Maelström” (1841) is the report by a fisherman from the Lofoten archipelago of the monstrous whirling grandeur and cruelty of an enormous whirlpool into which he plunges, but does not drown.

Locust Jones opens himself to the endless procession of text and images from the web, TV, radio, shop-windows, advertising, magazines, and newspapers. He absorbs and processes them, and then draws what has impressed him most, in an artistic process of radical contemporary witness. He is a fighter who brings to paper with heroic immediacy, and so transforms, the visual and linguistic assaults of the media vortex to which he and all of us are subjected.

His drawings are a “stream of consciousness” which gives shape to the confusion and unease in the face of the catastrophic processing of our world, and artistically reverses it. In an interview, Jones said that his art functions as a “cathartic biographical diary” which, in an obsessive stream of pictures, attempts to gain control of the flood of pictures and news. There is great power in his drawings—they are expressive, conceptual, tragic-comic, affirmative, and resistant caricatures. He dispenses with any attempt to ingratiate himself or show calligraphic refinement. The power of his line drawing and painting works is obvious, but in reality his art penetrates much deeper.

It is only logical that Jones has moved into work that is much longer in format in recent years, as he decided not to cut his rolls of paper any more, but simply to go on unrolling them, as soon as the ink is dry. This artistic decision has led him to the exhibition of an extremely long roll of paper: “Bankrupt, Isolated, and Confused,” which is 100x10,000 cm, on which he worked from September 2011 to August 2012. Exposed on this 100-meter-long drawing are the scoundrels and lies, the crises and wars, depictions of Batman, and self-portraits from an entire year. The flow of time is artistically caught in the names and faces, headlines and scandals, in a wild mix and without any order.

Locust Jones works with ink, graphite, and gouache, on extremely durable paper, spontaneously and without preparatory sketches. Here the course of a year acquires a physical presence and appears to have been unrolled in the form of an ornamental vortex. “Bankrupt, Isolated, and Confused” dominates the gallery space in a great, expansive spiral.

“He saw that the Maelström is a beautiful and awesome creation.” —Edgar Allan Poe